It’s a campground in the little town of Vanderhoof, BC, on the bank of the Nechako River, a world renowned bird sanctuary and home to some great hiking and biking trails. But today, in the bitter chill of a Northern December day, it’s a series of stages where the greatest story ever told is unfolding as we walk, shivering, down the winding path . . . 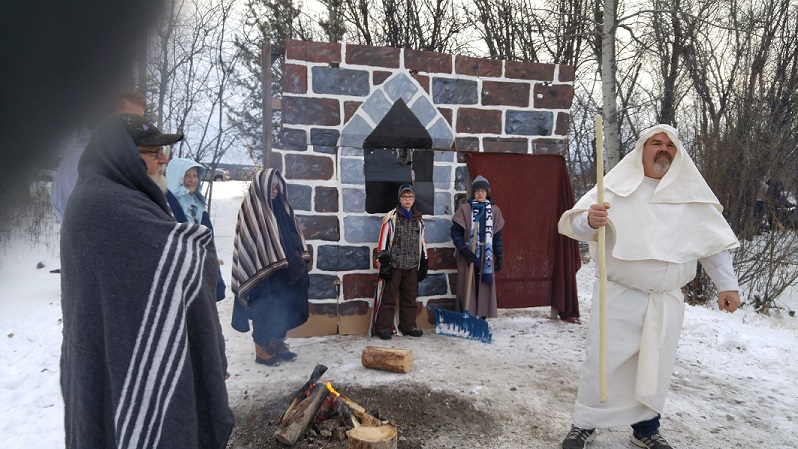 Very long ago, the prophet Isaiah tells the oppressed and despairing people of Israel of a coming savior…Behold, the virgin shall conceive and bear a son, and shall call his name Emmanuel, God with us. A bruised reed he will not break, and a faintly burning wick he will not quench; he will faithfully bring forth justice. And when it comes, his reign of peace will never end. Don’t despair, it will come! 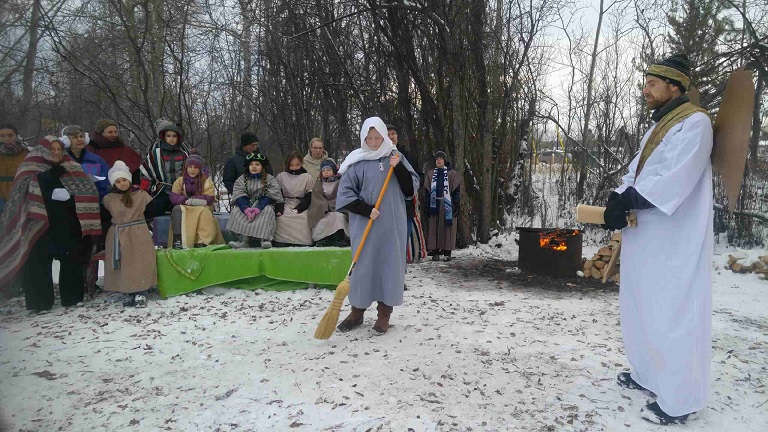 700 years later, the angel Gabriel visits a young Hebrew virgin, Mary, with the amazing news … the child you bear will be the son of the most high God, that he will free the people from their sins. And Mary believes and accepts her mission…Let it be as you have said! 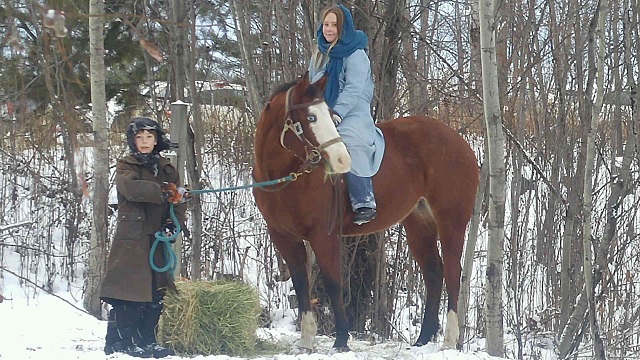 And in those days a decree went out from the oppressive foreign rulers, that everyone should be taxed. And Joseph went up from Galilee to the town of Bethlehem, to be taxed with his promised wife Mary, who was already very pregnant. 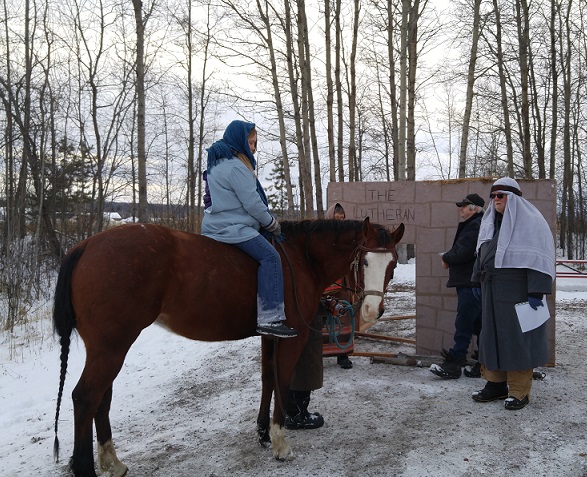 But when they reached Bethlehem, there was no room for them at the inn! The stables were all that was left for them. And so … 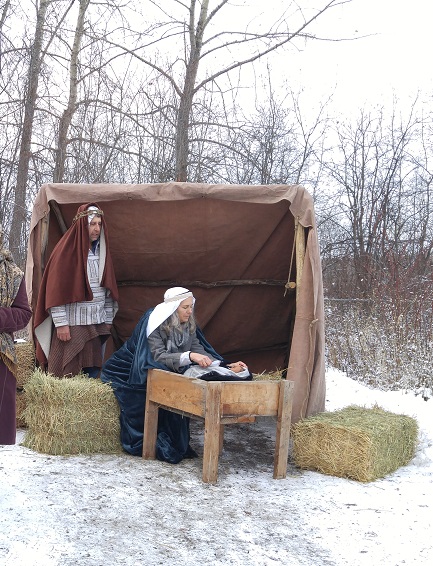 Mary gave birth to her first-born child, the long-promised messiah, in a stable and laid him in a manger. 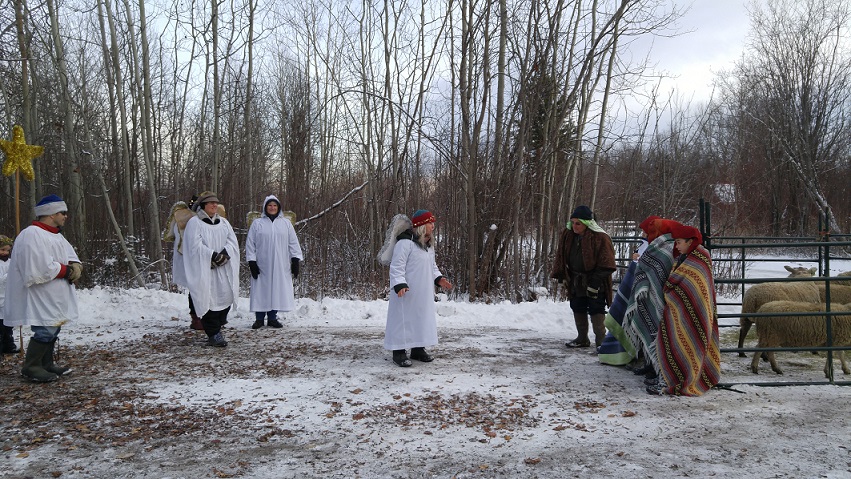 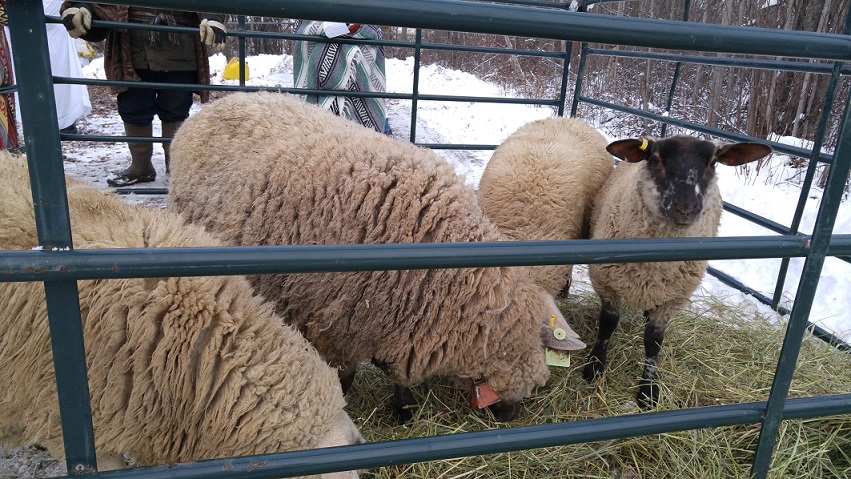 And on the night of his birth, the angels visited humble shepherds in the field : Glory to God in the highest, and on earth PEACE, GOODWILL TO ALL PEOPLE! And the shepherds said: Let’s hurry to Bethlehem and see this miracle!

Wise men from the East came to Jerusalem, saying, “Where is He who has been born King of the Jews? We saw His star in the East and we understand the significance of this miracle for the whole world.” And when they had seen the child, they worshiped Him and brought him gifts of gold, frankincense, and myrrh.

And as the journey and the story ended, I was shivering with cold and so grateful for the free TimHorton’s hot chocolate and the warm fire at the end of the trail. But I was left with something more significant. I was touched by the amazing cooperative effort of all the churches of the town, coming together on this very cold day, to perform this play for us, without compensation, with joy, with humility, in a spirit of cooperation. And I believe, with all my heart, that The One at the centre of it all, would approve! 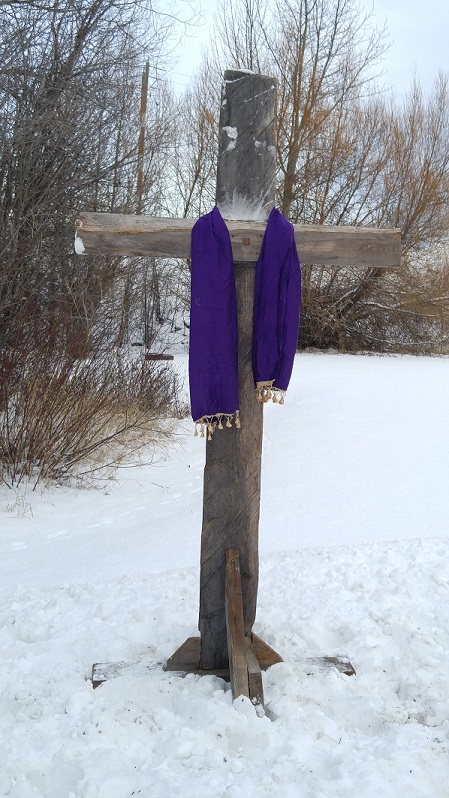 My name is Elise and my husband Randy and I bought a 1982 Westfalia and named her SweetEsther .... that one wonderfully impulsive decision has changed everything! View all posts by SweetEstherChronicles

One thought on “…and that’s what Christmas is all about…”

© Elise Forgo and SweetEsther Chronicles, 2019. Unauthorized use and/or duplication of this material without express and written permission from this site’s author and/or owner is strictly prohibited. Excerpts and links may be used, provided that full and clear credit is given to Elise Forgo and SweetEsther Chronicles with appropriate and specific direction to the original content.